A Resurrection
On Matoaka

Words and (some) photos
by Phil Lederer

Take the blacktop north from the city, pass University and look for Tallevast. Hang left where the warehouses and depots, sun-baked and still, shimmer in the summer heat like so many corrugated mausoleums. At the last one, find an open door.

The signs by the door are unintelligible at this point—metal squiggles looking like misplaced letters from a lost language—but they seem to point inside, where you wander amongst the disemboweled remains of downed aircraft still dreaming of flight. And in the corner, the strange man from up north works in fire and steel. Where he came from, travelers and neighbors would bring him offerings—lost things, found things, broken things, dead things—and he would forge new life into them.

His name is Ralph Berger. And he’s beginning to think that he might be an artist. 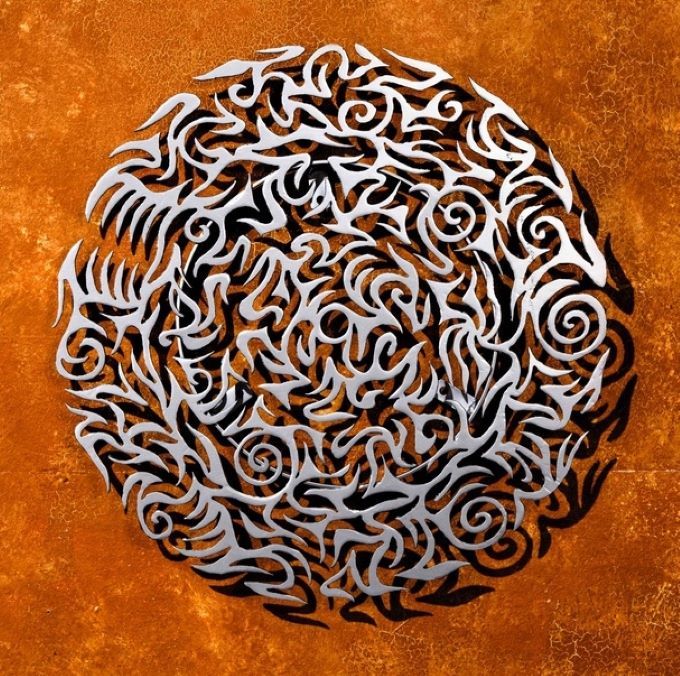 “I only became a believer in the last few years,” Berger says, and there yet remains an obvious reticence to say the word itself and a discomfort in its application.

‍Berger will dance around it instead, and apologize profusely. Never mind that we’re already in his studio, sitting in a pair of mismatched chairs and surrounded by a steel forest of the four-foot-wide circular saw blades that serve as his canvases, each one intricately hand-carved into a sort of frenzied mandala that dizzies the eye upon close inspection.

But that’s alright. He’s taken a long path to get here, through three states, countless hot dogs, two amorous alpacas and one terrible motorcycle accident. It all starts, as so many good things do, with the kid who wouldn’t pay attention in class.

“I couldn’t concentrate,” Berger the Bad Student says. The only classes that ever engaged him were art, music and “manual training,” which is either the best or worst euphemism for woodworking this side of puberty. “But I never thought I could pursue art,” he says. “It was just never brought to my attention.”

So the man who would be sculptor went to college instead. 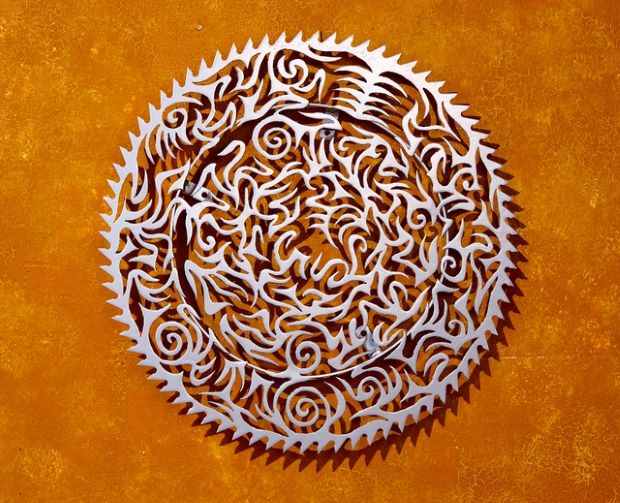 From there it was the family business at a meat processing plant up in Boston, making hot dogs and cold cuts. Then 25 years in women’s fashion, selling and designing, where Berger rediscovered his need for artistic expression amidst the “insanity” of a grind that was starting to take its toll on his soul and his health. He battled addiction. He found surprising catharsis in nightly drawing—endless, aimless doodles that filled the page with strange shapes and then a whole portfolio too.

“I can’t draw a tree or a face or a dog or anything,” he says. “The only thing I’ve ever done are these designs.

”Some of the early work comes across as whimsical and light—multicolored triangles and other easily recognizable and categorized forms. The friendliest ones even made it onto the racks, printed on women’s dresses and the like. But something happens as the pages flip and Berger dives deeper into the artist inside and whimsy gives way to urgency. The shapes begin to fill the page in red and black like electric fire, angular and angry—a crazed geometry that derives its order through the brute force of repetition and iteration. The white space recedes and the work comes to light as more than disparate doodles, but a composition of interrelated forms.
‍
These will never be printed on any dresses. When Berger makes them, he’s thinking of his own struggles with mental health. He’s remembering racist murders in Mississippi. He’s trying to come to terms with nightmares like Auschwitz. They have titles like, “My Brother’s Keeper.”

He draws them because he must, but they stay trapped in his portfolio for decades. 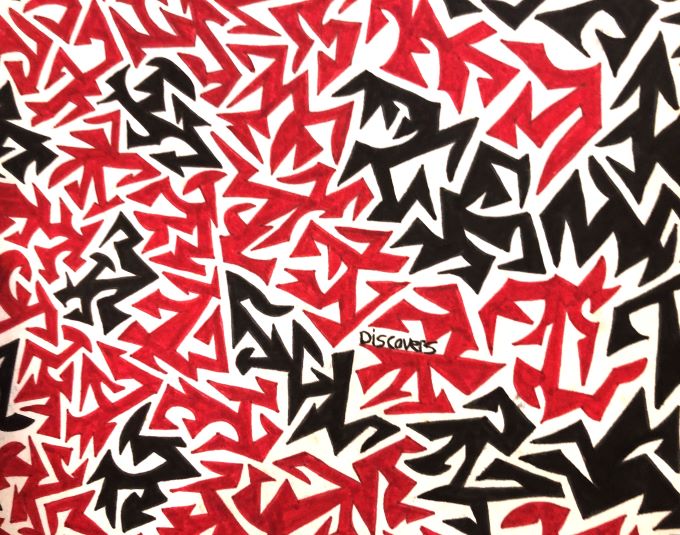 They finally start to break free when Berger is unceremoniously struck by a car and meets a male nurse named Beaver, who tells Berger about a community college some 30 minutes away, where he’s thinking about taking a welding class. “We drove up together,” says Berger.

And Beaver introduced his former patient to what would be two of his greatest friends: a MIG welder and a plasma torch. 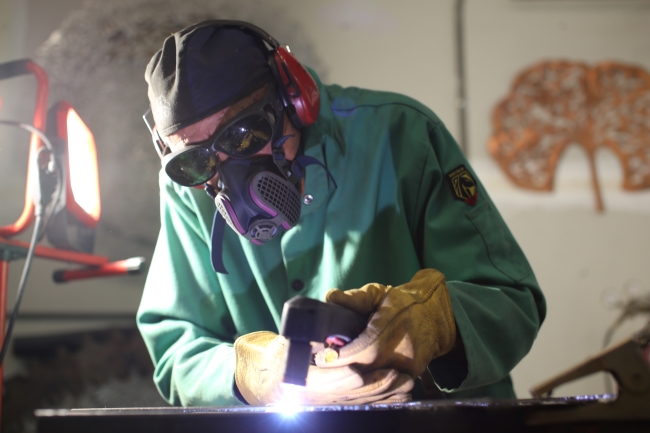 It may be the case that all human thought can be broken down into two fundamental cognitive functions: analysis and synthesis. The idea being that, no matter how complex the thought or how nuanced the understanding, at the root of it all are the simple acts of taking things apart and putting them together.

Handily enough, that’s exactly what a plasma torch and a MIG welder do.

So Berger did what every artist has done at some point in their lives: he threw out his sketchbook, robbed a lumber mill in North Carolina, and started doodling with a plasma cutter on industrial-sized circular sawblades.

Just kidding. That would be crazy irresponsible. A plasma cutter operates at around 45,000 degrees Fahrenheit and is easily capable of causing serious damage to solid steel, much less squishy mammals named Ralph.

No, it all starts with the sketch.

With the plasma cutter safe and quiet in the corner, Berger leans over the expansive steel blade and begins to sketch on its surface with a bit of soapstone. In his other hand, a wet rag stands at the ready to erase any errant marks or ill-advised excursions. These will happen.

“Until I get the right flow, I erase all the time,” he says. His early work didn’t have the flow and it’s something that he has to seek when he creates. “I can’t just sit down and it comes out of me,” he says. “It takes time.” 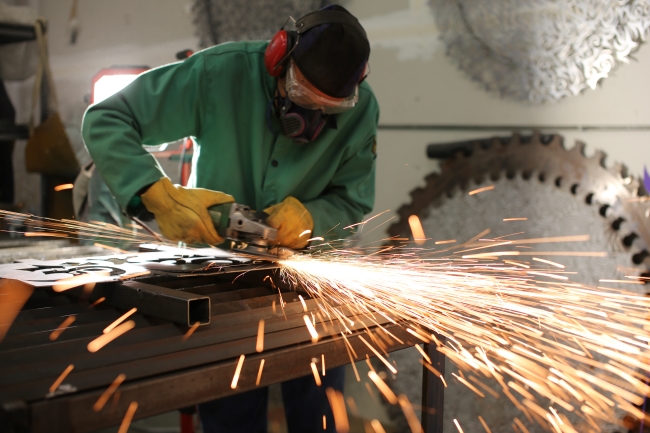 In the end, despite the heavy-duty nature of the cutting and welding to come, it is the sketching that will take the most time, as each of the 4-foot-wide blades actually requires multiple individual designs. Forming concentric and overlapping circles, these carefully plotted and interrelated designs must be laid out so that they can be carved from the whole with a single continuous line, thus allowing the pieces to be separated into both positive and negative images. As a result, each saw blade yields multiple sculptures that can be displayed in relation or in isolation.

But this glosses over a central nagging question: where the hell is Berger getting these giant saw blades?

Well, he didn’t start there. 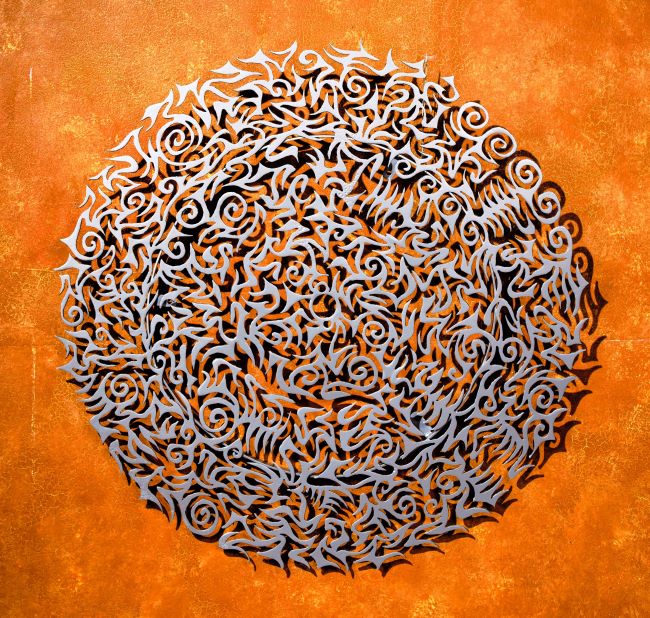 First came the buoy, carted from that northern shore down to North Carolina, its strange purpose finally revealed in the white-hot glow of a community college plasma cutter. Taking his torch to the metal bauble, Berger carved into its skin those early jagged runes from his doodling days, flowing and whirling over its entire surface like water. He named it “A Toy for Sisyphus” and gave it to Joyce, maybe a wry statement on the never-ending task that is wrangling a wandering artist or maybe just because it looks really cool.

But, not being a 19th century railroad tycoon, Berger’s steel supply was quite low. The town of Rutherfordton, on the other hand, had a long and happy history of using great amounts of steel to cut down an even greater amount of trees. And soon Berger was sifting through junkyards and antique shops, coming up with all sorts of discarded steel, from disc harrow blades—small, concave soil tillers made of thick sturdy steel that Berger could practice on with simpler designs and concepts—to whole stacks of the four-foot behemoths he prefers to work on today.

“When I go into a junkyard and see what our society has thrown away, it’s really a sin,” he says. “And I’m as guilty as anyone, but if I can make a beautiful sculpture out of junk, it gives me a good feeling.” 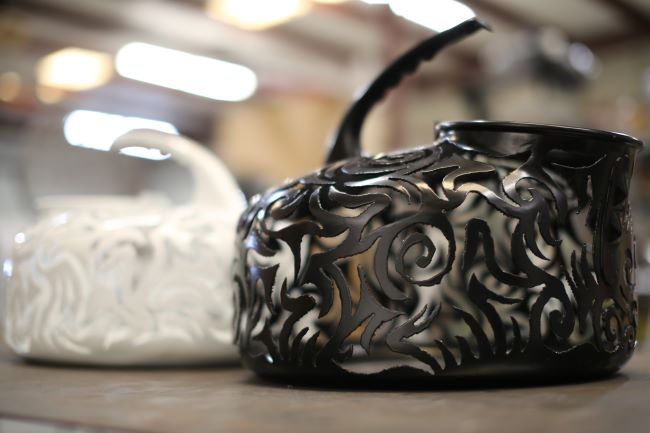 It didn’t take long for the community to catch on to the fact that some strange man was buying up all sorts of scrap metal and taking it to his house with unknown intention. Instead of angering said strange man, they made the wiser choice and appeased him with offerings of their own, which ranged from the mundane to the militant.

They brought more old saw blades, rusted and warped and pulled from the junkyard. They brought 18-wheeler exhaust pipes found along the side of the road and even a pair of old canisters that once held propellant explosive for a 155mm Howitzer cannon. Berger takes it all in, cleans it up and carves it into something new.

One of his oldest pieces was a water tank in its former life. A useful-but-boring four-foot-something cylinder with about as much personality as a beige marker that’s run out of ink, Berger spent more than 80 hours working on it, even climbing inside and almost rolling off the table mid-weld. In the end, it became a beloved piece of public art that anchored revitalization efforts in various communities throughout North Carolina. “It’s the gift that keeps on giving,” he says.

After all, some things just need a little love, from a woman named Joyce or a plasma cutter, to be what they’re meant to be.

“The best is within me to come out,” Berger says. “The same can apply to any found object.” 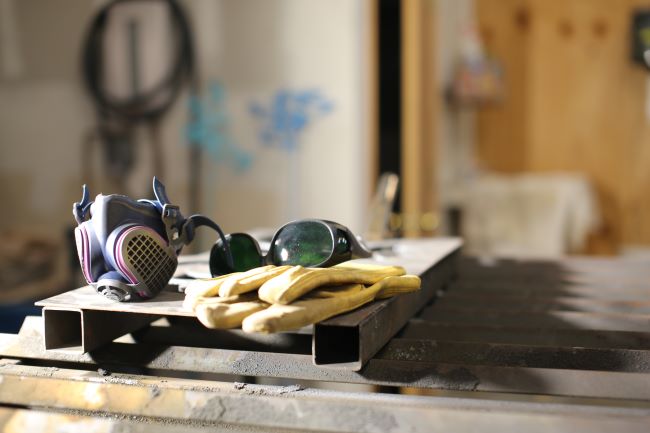